Klonopin is a benzodiazepine (benzo), which are a large group of drugs that are prescribed to treat problems with anxiety, stress, panic attacks or insomnia. Klonopin works by depressing the central nervous system and can become addictive if a tolerance is built up to the medication. Most problems occur when Klonipin and other benzodiazepines when they are taken for long periods of time or when they are abused by being taken other than prescribed.

If you suspect your loved one might have an addiction to Klonopin there are symptoms that you cannot miss and should not ignore. Someone abusing Klonopin will appear off balance or dizzy and may be incoherent. Their speech is often slurred or garbled. They might move slowly and have decreased control over their motor functions. They might not remember things you have already told them multiple times or even have amnesia-like symptoms where they forget basic things about themselves or others.

They might be confused, irritable and hostile towards you or loved ones or withdraw from family altogether by avoiding interaction. They might stay in their room for long periods of time and may sleep for days at a time. Weight loss can occur as well as a disheveled appearance from lack of concern about anything other than obtaining or using drugs again. 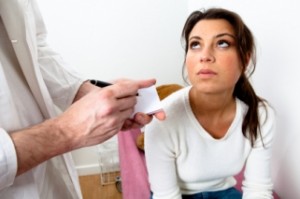 Visiting the doctor often for new prescriptions is a sign of addiction.

When someone is abusing drugs like Klonopin it usually begins because it prescribed by a doctor for a valid health reason such as anxiety and panic attacks. Unfortunately, once they become addicted, they need increased amounts of the drug to feel the same effect the had initially. Because benzos are prescribed medications, people often feel that is okay to use more than prescribed or to take an extra dose if they feel stressed.

Once they run out of the original prescription, they have to figure out a way to get more. This often leads to what is called “doctor shopping”. An addict will go to several doctors for prescriptions of the same medication. If your loved one is asking you to drive them to various doctors appointments and pharmacists to fill prescriptions for the same drug this should be like an arrow with bright flashing lights that they are addicted and need help. According to NIDA, “Drug addiction is a complex illness characterized by intense and, at times, uncontrollable drug craving, along with compulsive drug seeking and use that persist even in the face of devastating consequences”.

Is it vitally important that family recognize signs and symptoms of any kind of addiction and begin seeking some kind of treatment. It is often believed that in order for an addict to be helped that they have to want help. Studies have shown that to be false and indicate that treatment can be effective even when chosen involuntarily. Talk to your family doctor and see what kind of programs might be an option. Your doctor will probably recommend an outpatient treatment program if the person hasn’t already attempted treatment in an outpatient program at least once before and failed. Inpatient treatment might be recommended if the person is unable to isolate themselves from the negative environment that leads to relapse and using drugs like Klonopin again. Not sure where to start? Use the SAMHSA Treatment Locator or call 1-800-662-HELP (4357).